It’s called the Church of the Holy Seplecur, and it’s located inside the Old City of Jerusalem.  Scholars date the time period back to Jesus’ Crucifixion and Resurrection even though the church is actually a Crusader church from the 1090’s, and it’s one of the ‘must see’ sites on any ones tour of the Holy Land.  Of course, depending on who you talk to, the church has been destroyed and rebuilt by so many empires it’s tough to be 100% sure about anything in this region of the world, but most will say with 99.9% accuracy…This is the place.

Inside the Church, which is run by Greek Orthodox, Catholic, and Armenians, are several places commemorating the life, death and resurrection of Jesus.

Most Notably is this section of Calvary where archeologists say Jesus was Crucified.  This is a place where fellow pilgrims come to pray and touch the very rock where they think Jesus died.

Every time I come to this church I get the feeling I’m entering the Jesus Disney World.  Long lines to touch the rock feel  like the same lines to ride the rides in Orlando.  But I’m compelled by something driving me to stand, pray, and reflect.  I guess we’re conditioned as people to take even the most sacred to this crazy ‘line leader’ mentality.  Stop, Wait your Turn, Ok You’re next, and then…

it’s over. You walk out of the church and move down through the Old City of Jerusalem to the next site.

Last week when I took my first KIVU Gap Year group through the Holy Land, I mentioned to our guide Rami, “Wouldn’t it be really cool to just have the chance to sit and pray there?  I wonder what God would do?”

“I think we can stay the night in the church if you want,” he told me.

“ARE YOU SERIOUS??  That would be AWESOME!!”

“Let me check it out, and next week when you come back, maybe we can do it.”

So, for the last week, I’ve been waiting in anticipation to see what it was going to take to actually spend the night in the Church.  What would I do?  What would I pray for?  Could we come and go?  Or would we be stuck?  After all, it’s not THAT big of a building.

Anyway, I mentioned it to him again on Monday this week, and he said, “Yea, I got it taken care of.”

“So…when do we go?”  I asked anxiously

“I’ll come to your hotel at 6:30 p.m., and we need to meet with the Father at 8:00”  He was talking about the Franciscan monk he knew that was going to write a permit through the Greek Orthodox Church.  Evidently, they allow a few people each night to come and spend time in prayer.

So last night, Rami and I went to pray and meditate in the Church.

We arrived at the church at 7:30 and found out it was a little too early.  So we went to have dinner in the Jewish quarter to make sure we had enough food for the long evening.  I found out we had to stay in the church all night long, so the doors were going to close at 8:30 p.m. and not open again until 5:30 a.m. Once the Greek Orthodox priests closed the doors, that was it.

So we arrived back at the church at 8:30 and met with our contact.  He told us the ‘rules.’  Basically he said, don’t touch anything, don’t light any candles in the night, and make sure you stay out-of-the-way of the masses that would be going on through the evening.

Yep, you read that right.  Starting at 12:00 every night, the Greek Orthodox guys start mass until 3:00.  The Armenians go until 5 or 6 and then the Catholics take over.  He just told us to stay clear of the tomb after midnight, but until then, it’s all yours. 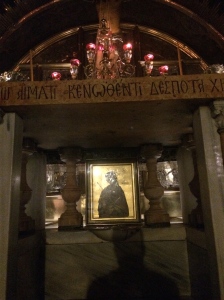 The first thing I did was to run up to Calvary and set up camp.  I brought some water and some snacks just in cast I got hungry, but I was really interested in spending some time up there near the crucifixion site to pray.

I read through the gospel accounts of the Crucifixion while sitting right on top of Golgotha.  I can’t tell you how incredible it was to stop every now and then and pinch myself.  How in the world did you get yourself here, Braner? I thought.  And then I just quietly said thanks.

Most of my time up there will remain my story to the grave, as it was incredibly spiritual.  As a Jesus follower, this was probably the climax of sitting in church for me.  I mean, come on, I was sitting and praying right in the place where Jesus was.

Many thanks to my friend Ted Z. back in Durango.  He’s taught me a lot about how to pray, and I was using all my technique here at this place. 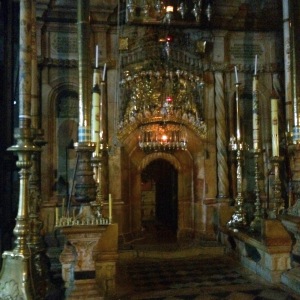 About an hour into my prayers on Calvary, I decided to get up and head down to the place where the tomb is.  Most of the days you can find hundreds of pilgrims lined up to enter this cave waiting to touch the place where they think Jesus laid to rest before the resurrection.  Last night, there were literally only 5 people in the whole church, not counting the priests and monks running around all night.

So I slowly crept in the opening which led to a small room structure.  There were icons all over the inside, and then a smaller entrance that led to a marble slab where they told me Jesus was probably put in for the burial ceremony.

I knelt by the marble slab and prayed for what seemed like minutes, but when I looked at the time, I’d been in there for nearly and hour and a half.

Again, this is such an unbelievable place for people who believe in the resurrection, it just takes all sense of time away, and you find yourself wrapped up in the beauty of the Jesus story.  This radical prophet who heals, preaches, and teaches all sorts of people throughout the holy land, comes to be crucified and resurrected right here.  Then and only then, all the people buy into the fact he’s actually the Son of God.  Needless to say, this was surreal.

The Greek Orthodox priests started their nightly mass, so I had to move.  As I watched them perform their nightly ritual and there was something interesting about the dedication of these men.  Every candle was lit to perfection.  Every move they made was elegant and scripted.  They were in full worship mode.  And they do this EVERY NIGHT!!

All of the sudden I heard a chanting coming from another chapel.

I wondered over to the sound of Franciscan prayers, and found a group of monks praying at 12:30.  They opened up their chapel where they keep the stone where Jesus was tied up for the scourging, and on this particular night they were praying the holy week prayers for the time Jesus was beaten.  I sat in amazement at the dedication of these men.  It was the middle of the night, but you would have thought they were praying for a congregation of thousands.

I came out of the chapel to the stone where Jesus’ body was prepared for burial, and saw this mosaic on the wall and stopped.  I don’t know what it was, or why it moved me, but I just sat down and started to weep.

I wasn’t sad.
I wasn’t overly emotional, at least I didn’t think I was.
I just felt some overwhelming feeling of gratitude.  The God of the Universe came to give His own life so I might have life.  BOOM!!  My mind just couldn’t take it anymore.  I almost laid in the middle of the path leading from the tomb, and just cried.

My friend told me of this mosaic, by the way, the skull pictured at the bottom of the scene is actually thought to be the place where Adam was buried.  That’s right, some people think that Jesus was crucified right over the burial place of the first Adam.

And finally, my evening took me down to the bottom of the church where St. Helena was said to have found the three original crosses at this site, and dedicated the church to the story of Jesus.

It was 3:00 A.M. by now, and I was beat tired.  I laid my head down on my backpack and was suddenly awakened to another priest who was smoking the place up with incense.  And it was then I felt the Garden Story.  I couldn’t even stay awake all night long enough to pray.  It hit me.  That’s what the disciples must have felt like.

They knew something was going on, but they didn’t have the stamina to keep their eyes open.  And I’m telling you, in the darkness of this church, it’s tough to stay awake in the silence.

My friend Rami found a small dark alcove to lay down in, and so just the two of us were in the bottom of this church.  It was AMAZING!!

At 5:30, I woke up to another strange noise, and wandered my way up to the opening of the building.  The priests all gathered to perform the ceremonial opening of the church to the public, and Rami and I decided it was time to go.

We walked the dark streets of the old city of Jerusalem, cold and rainy last night, and we found a baker making his morning bread.  He gave us a big ring of sesame bread, and then we found a dark corner where another guy was making coffee.  We sat, ate our bread, drank our fresh turkish coffee, and talked about what an interesting evening the both of us just experienced.

I’m grateful for my friend who suggested we do this.  What an unbelievable spiritual journey this was.  Thanks Rami.  I really appreciate you and your willingness to accompany me on this trek.

I’m thankful for the Greek Orthodox priests, and the Franciscan monk who let us in.  You guys gave me an experience I’ll never forget.

But ultimately I’m thankful for the life of Jesus.  His teachings on earth are more real than they’ve ever been in my life.  I’m thankful for the sacrifice made on Calvary.  And I’m humbled by the notion that even through the resurrection, there’s a God who invites me to spend the night in search of my own relevance to this life through His eyes.

There’s so much more to write, but I think I’ll just keep those little intimate moments to myself.  After all, The Night I Slept With God was a night I’ll never forget.  This Holy Land trip will go down as the TRIP OF A LIFETIME.